“The typical human brain can hold about seven pieces of new information for less than 30 seconds!”


Long before PowerPoint became an inevitable part of corporate and academic life, I had


the good fortune of attending a memorable training program. The Professor was one of the great thinkers of the time. Each day we were given a case study at 4 in the afternoon and were required to make a presentation the next morning at 8. The tools at our disposal were acetate sheets and marker pens in different colors. We had tight budgets and to make the best use of each sheet, we wrote as much as we could on a single sheet. The moment we placed the sheet on the projector and switched on the light, the screen was filled with text, numbers, and calculations. Before the presenter could start, the Professor would ask the presenter to stop, take a seat in the front row, and tell the presenter:” Come over here and sit next to me. We will read it all together.”


In the initial stages, this was embarrassing, humiliating, and many broke down. The gentle Professor took us through the stages of making great presentations. By the end of the course, each one of us gratefully acknowledged the valuable lessons.


Today we live in a different world. No conference is complete without a dozen or more PowerPoints. The same thing goes for classrooms, training rooms, and business meetings. For a few years as an academic, I consciously gave up presentations altogether and went back to the traditional method of writing on a board.


Why are we so anxious to bombard our audience with information overload? To quote David Ogilvy, “most people use PowerPoint like a drunk uses a lamppost – for support rather than illumination.”


Cognitive science tells us that we process 90% of information visually. On top of this, we process visuals 60,000 times faster than we process text. Yet, two of the webinars that I participated in this week had 90% of text. I did not enjoy either of them. Sure, top-notch scholars and practitioners made the presentations. My frustration is amplified as a result. If this is what the best brains in the business have to offer, what can we expect from others?


A Google search for “Death by PowerPoint” shows nearly 6 million results. Every day, some 300 million presentations are made. There are books written about it, a TED talk by J P Phillips, and loads of wisdom from everyone who is someone in the world. I won’t repeat them.


As Chris Anderson, the curator of TED observes: “Presentations rise or fall on the quality of the idea, the narrative, and the passion of the speaker. It’s about substance, not speaking style or multimedia pyrotechnics. If you have something to say, you can build a great talk. But if the central theme isn’t there, you’re better off not speaking. Decline the invitation. Go back to work, and wait until you have a compelling idea that’s really worth sharing.” (Source: HBR, June 2013).


If you want to understand what a great presentation looks like, here are some unusual examples: 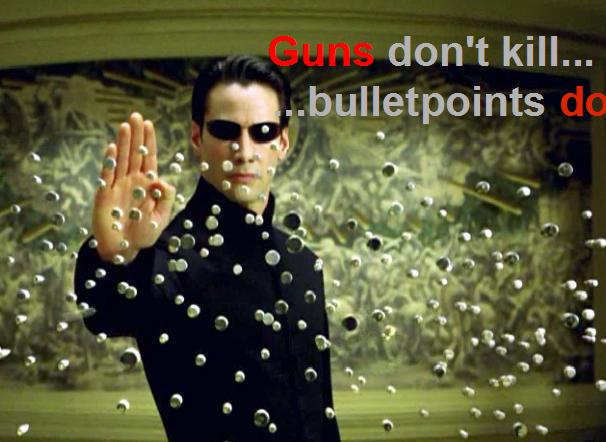